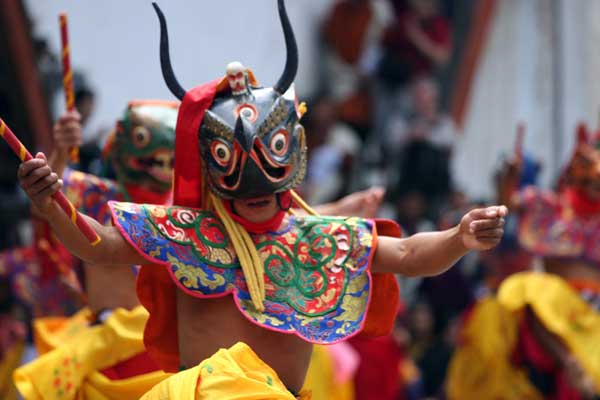 The country of Bhutan is a land of happiness and prosperity. It boasts of its pristine beauty and captivating heritage and is one of the most spectacular places on earth. Bhutan is known for its vibrant and colourful festivals, which are held in the honour of Guru Rinpoche. Although the natural beauty is one of the major attractions of Bhutan, it is also suggested to explore the rich cultural heritage of the country. Here is a list of top 10 festivals of Bhutan you cannot afford to miss.

It is one of the most popular cultural events in Bhutan and is held during springtime. Paro Tshechu is celebrated in the city of Paro, where several tourists and locals gather around the courtyard of the dzong. The festival is marked by the masked dances performed by lamas and laymen.

Haa Summer Festival is a must attend in Bhutan. It showcases a blend of cultural extravaganza and tranquillity of nature. The festival is a celebration of nomadic and traditional lifestyle of the Bhutanese people.

The festival of Punakha Drubchen is a celebration of the country’s victory over the neighbouring forces of Tibet. Presently the festival is an annual event, celebrated with joy and pride.

This festival is celebrated with great joy every year and is being celebrated since the 17th century. It was introduced by Zhabdrung Ngawang Namgyal for celebrating the deeds of Guru Rinpoche.

This festival is celebrated in the lush green Merak Valley and offers an insight into the Brokpas community. During this three-day festival you will be able to come closer to nature and its beauty.

The Thimphu Tshechu is a 3 day cultural extravaganza held in the capital of Bhutan, Thimphu. It is attended by locals from neighbouring districts and is one of the most popular festivals of Bhutan.

This festival is like none other in the country. It is of huge importance to the locals of Trashigang. Ghompha means meditation cave, whereas Kora means circumambulation.

Standing at a height of 3000 m above sea level, Sakteng Valley hosts one of the most exciting festivals of Bhutan. This festival is celebrated by the locals called Brokpas and is an occasion of merrymaking.

This a cultural festival aimed at spreading awareness about the sustainable harvesting of local mushrooms and various other organic foods. It is held in the scenic Ura Valley with some lip smacking dishes and dramatic landscapes.

This 4-day festival is a must attend in the town of Bumthang. It is celebrated for two reasons- firstly for celebrating the deeds of Guru Rinpoche and secondly for commemoration of the establishment Jambay Lhakhang.